I should start this product review by saying I will be covering more topics than just my new eReader—because, well, I’m not known for staying on topic. Although I am a book-in-hand kind of gal, I’m running out of room in my little home library (meaning the shelves are starting to bend), so last week I began the hunt for an eReader (gasp in horror, I know!).

I very quickly decided that I would have to go with Amazon’s Kindle for a number of reasons. 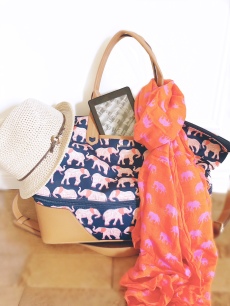 My eReader is gearing up for a vacation.  Now we just need someone to take us somewhere!

But first to the eReader. I snagged the Kindle Paperwhite on sale for $99.99 on Amazon’s Prime Day last week. It’s actually the only thing I bought that day and it just so happen to coincide with my decision to become an eBook reader, so I figured it was written in the stars somewhere for me to buy this one. For those who aren’t aware Amazon’s Prime Day is sort of like a “Black Friday” type sales event for those who have a prime membership with Amazon (membership includes free shipping, easier returns, exclusive deals, etc.). I order enough stuff online to make this paid service worth it. The eReader arrived a day late (what the hell Amazon?!), but it was easy to use, compact, and it came pretty much fully charged so I could play around with it a bit and read a little too. When I first saw it I thought the 6 inch screen was too small, but I adjusted the font size and to be honest I don’t really know any different so it’s working for me.

I set up the eReader with relative ease and began my search for books.

For books, like any other eReader, you can search on the actual device when hooked up to Wi-Fi, find a book, buy it (usually for a fraction of the cost of the paperback), and download it to begin reading.

I have quickly determined there are quite a few benefits to an eReader. The first being that if I decide at ten o’clock at night I want to read a book, I can read it five minutes later. I don’t have to wait until I have time to nip to the shops and buy the book—that is both convenient and worrying for what my credit card bill might look like next month, ha! The kindle is also linked with Goodreads (which are now owned by Amazon and are turning a little too corporate for my liking, but that is a whole other blog post my friends!), so you can read both Amazon reviews and Goodreads reviews (Goodreads tends to have more) before you purchase.

And we all know the importance of book reviews from my post last week, right?

But besides the late night impulse shopping and the reviews, Amazon also has this amazing service called Kindle Unlimited. This is basically the Netflix of books.

The way Kindle Unlimited (KU) works is you pay a monthly subscription fee (I paid $9.99) and you get access to a million books in their database. Now, not all books are there, and some of the more well-known authors have zero books enrolled in this program for you to borrow. There are two reasons for this:

I just read a fantastic series on KU by Rachel Caine. The first book Stillhouse Lake and the second Killman Lake were just amazing. They are available through KU and I would one hundred percent recommend them (but don’t start them if you want to sleep tonight, because they are just too good to put down). And guess what I did after I read the books? That’s right, I wrote a review (see below)!

Now, I should point out that the Kindle is NOT friendly with the Canadian Library system, and quite frankly I don’t think they ever will be. Why would Amazon want to lose sales for you to borrow a book from the library for free (you can with the KOBO reader)? The only problem with borrowing the eBook from the library is you have to wait your turn just like any paperback. They don’t have an infinite amount of eBook files to give out, so you request it and wait just like if you were getting a physical copy of a book, which to a “I need to read this right now!” person like myself, that system doesn’t work very well.

So now I need to hear your thoughts. What eReader do you have—do you love it and why? And more importantly, is anyone else reading any Kindle Unlimited books and has  recommendations for me?

Gina Royal is the definition of average—a shy Midwestern housewife with a happy marriage and two adorable children. But when a car accident reveals her husband’s secret life as a serial killer, she must remake herself as Gwen Proctor—the ultimate warrior mom.

With her ex now in prison, Gwen has finally found refuge in a new home on remote Stillhouse Lake. Though still the target of stalkers and Internet trolls who think she had something to do with her husband’s crimes, Gwen dares to think her kids can finally grow up in peace.

But just when she’s starting to feel at ease in her new identity, a body turns up in the lake—and threatening letters start arriving from an all-too-familiar address. Gwen Proctor must keep friends close and enemies at bay to avoid being exposed—or watch her kids fall victim to a killer who takes pleasure in tormenting her. One thing is certain: she’s learned how to fight evil. And she’ll never stop.

Umm, holy crap. I don’t even know where to start. Well, I should start off with this is one of those psychological thrillers that just kind of sticks with you. It’s an on the edge of your seat, can’t stop reading, suspect everyone, kind of novel. It was SO good.

The characters are flawless, and I have to say I like that information was very slowly presented to the reader as to the killings in Wichita and exactly what happened. I could understand Gwen (previously Gina) and her fierce protection over her kids. I could feel it. Her motivation is so believable that I wanted to cry in frustration to everyone around her that made her life a living hell.

I could totally run a book club meeting with this novel. First off, could a woman be living with a man for that many years while he murders people in the garage and she doesn’t have a clue? HELL YES! I think you would be shocked what people are capable of, and more importantly capable of hiding.

And while all this psychological thriller stuff was—well, thrilling—what really resonated with me was the theme of cyber bullying. I think, given enough time and internet know-how, someone could easily ruin your life if they wanted to. I could walk into a restaurant tomorrow and say a rat ran over my foot on my Facebook page. How long do you think that would take to go viral? Who knows if I was even in a restaurant! I could take a picture of my foot under a table, Photoshop the rat on it and bam—that restaurants reputation would be GONE, because the truth is, how many people would actually stop and get the other side of the story?

In Gwen’s case, she doesn’t have a very good leg to stand on to begin with. She was completely in the dark as to what her husband was doing, but it’s not hard for an outsider to say, “Come on, how could you not know?” People stalk her and her children, because why should they get to live in peace when her husband destroyed so many lives, right? But then more bodies start to show up and all eyes are firmly turned to her again. But who is killing people now? I can’t tell you, you need to read the book. Like now.

Oh, did I mention it ends on a cliffhanger and there is a book two?