I woke up this morning and White Lies is on the Romantic Comedy, Romance and Women’s Fiction bestsellers lists on Amazon.  After I picked my jaw up from the floor I ran to my computer to make this post.

First of all, thank you so much to everyone who is purchasing and writing great reviews for White Lies, I couldn’t do this without you!

Secondly, never in a million years when I published White Lies a few months ago did I think this was a possibility.  Did I dream about it?  Of course… and maybe a little of that dreaming motivated me to push the book further than I would have.  But did I think it was an actuality?  Probably not.  Not because I don’t think it is a hilarious, solid written book (here I shamelessly pat myself on the back- seriously it took me four years to write… I feel this vanity isn’t terrible, though have no fear I am watching it carefully), but because I literally know NO ONE in the publishing industry.  Everything I learned I learned on Google (God bless that search engine and all it spews out).

Thirdly, I feel a little silly for admitting this now but I was extremely nervous I was going to get eaten alive in the publishing industry.  Because I don’t know anyone in the publishing industry I literally had no idea what the public’s reaction was going to be.  Every time I see a review and they aren’t throwing stones and hurling insults I literally feel a small weight being lifted from my chest.  We are our worst critic (hence why we don’t have to hide the mirrors around here anytime soon). 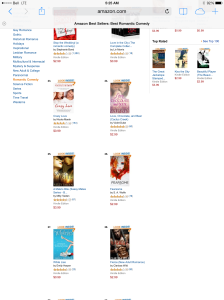 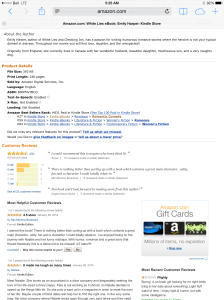 So what’s next?  My Checking Inn tour is starting next week, and I have no clue why but I am both excited and terrified at the same time.  I haven’t got many reviews back for it yet, and over the next two weeks some lovely book reviewers are going to be telling me just what they think of my second book.  Hopefully the sales of White Lies will encourage the sales on Checking Inn for the promotion period, one can dream.  And I have learned today that dreaming is not such a bad thing.